Disasters do not respect the lines we draw on maps. Big events such as the Indian Ocean tsunami of 2004 and the ongoing eruption of Nyiragongo in the D.R.C. also affecting people in Rwanda, affect multiple countries and this creates big challenges because different countries have very different ways of approaching risk and managing disasters. Volcanic eruptions are a striking example of this, and in the webinar “Understanding the transborder implications of volcanic eruptions using a holistic approach” some cases studies were presented and discussed. 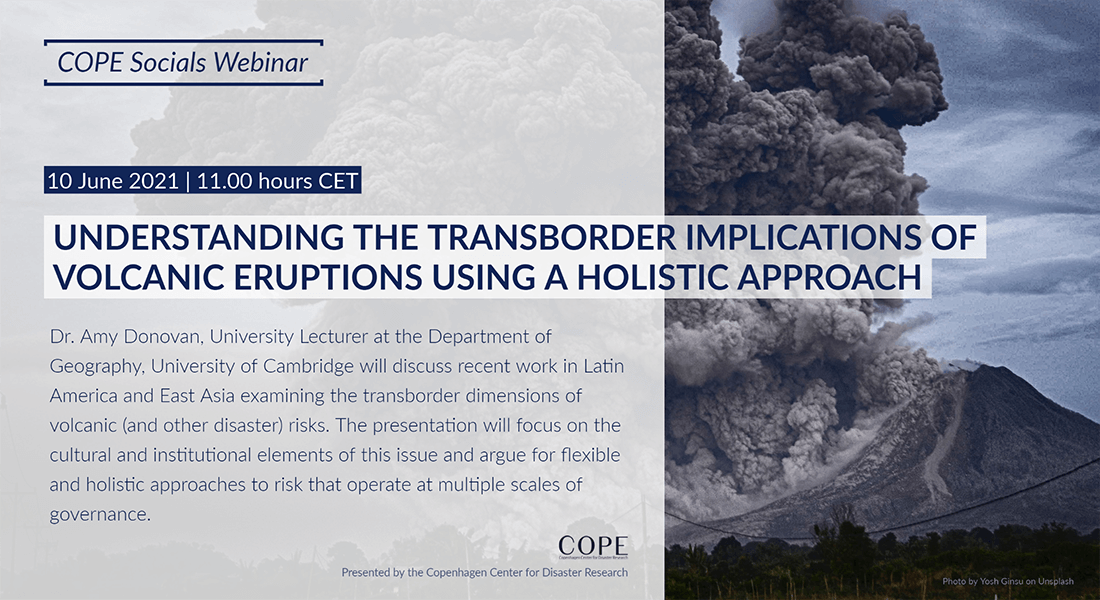 The webinar was hosted by the Copenhagen Center for Disaster Research (COPE) and held on 10 June 2021.

Dr. Amy Donovan, University Lecturer at the Department of Geography, University of Cambridge, discussed recent work in Latin America and East Asia examining the transborder dimensions of volcanic (and other disaster) risks. The presentation focused on the cultural and institutional elements of this issue and argued for flexible and holistic approaches to risk that operate at multiple scales of governance.

Scroll down to see the video recording of the webinar.

Dr. Amy Donovan presented her recent European Research Council project called IMAGINE, and two examples from the work she has done: The Puyehue Cordón Caulle volcano close to the border of Chile and Argentina, and Paektusan, a big stratovolcano crater lake on the border between China and North Korea.

Disasters are fundamentally context dependent. “Transboundary disasters in particular, really highlight some of the contrasts between nation states and the importance of the nation state in determining the results or the impacts of a disaster. Both because of its institutions and its policies, its development status, but also because of the resources that it has, both in terms of expertise and in terms of social capital.”

Further, “Volcanoes are interesting because they are relatively rare. There tends to be relatively little investment in them until an eruption happens, and that means that response is almost always very reactive. However, there are also many volcanoes on international borders, and because they tend to operate on geological timescales and not human timescales, they do get ignored until they do something catastrophic.”

Watch the entire webinar in the video below